Government relief: Now even poor patients of Corona can get free treatment in private hospitals through Ayushman and Maa card

stewover April 21, 2021
Government relief: Now even poor patients of Corona can get free treatment in private hospitals through Ayushman and Maa card. 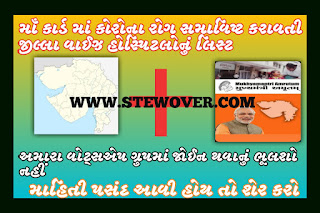 The government submitted the affidavit in the hearing of the Suomoto petition of the Gujarat High Court. 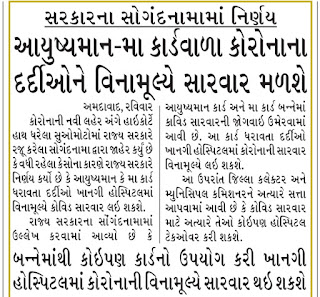 Poor patients with Maa card and Ayushman card can get corona treatment in private hospice.
The High Court is unhappy with the government's performance in the growing case of Corona.
Takingg note of this, the High Court has registered a fresh non-disclosure petition (PIL) under the title "Uncontrolled Rise in Covid Control and Serious Issues of Management" and has been hearing the case since April 12. In the affidavit filed by the government on April 15 in the Suomoto petition of the High Court, it was stated that the Vatsalya card and the Ayushyaman Bharat card included the treatment of corona.
Corona treatment in Ayushman Bharat and Maa Vatsalya card
On April 15, the government filed an affidavit in the High Court before Chief Justice Vikram Nath and Justice Bhargava Karia. It was only after the High Court's suggestion that the government started taking immediate and effective decisions to stop Corona. Also, the treatment of Kovid-19 has been included in the Ayushman Bharat and Maa Vatsalya card scheme, he said.
Poor patients will be able to seek treatment in private hospitals.
With this decision taken by the government, the coronated poor patients with Ayushman Bharat and Maa Vatsalya cards will now be able to get good treatment for free in a private hospital without having to worry about higher costs. The government said in an affidavit that municipal commissioners and collectors across the state have been given the power to take over any hospital if needed. In addition, hotels, hostels and community halls are being converted into covid care centers to accommodate patients with asymptomatic and mild symptoms.
High Court angry over treatment in hospitals
Notably, Chief Justice of the High Court Vikram Nath and Justice Bhargava d. Karia's bench held a hearing on the PIL registered under Suomoto on April 12. Advocate General Kamal Trivedi made a presentation on behalf of the Government of Gujarat, in which Chief Secretary of Gujarat Anil Mukim, Principal Secretary of the Health Department Dr. Jayanti Ravi and Health Commissioner Jayaprakash Shivahare participated in the hearing online. A bench of the high court in the hearing expressed displeasure over the government's policies in handling the status quo-19. The High Court had slammed the hospital for treating people, the shortage of remedicivir injections as well as the large number of people still gathering in public places.
The people of the kingdom trust in God
Earlier on April 12, the Gujarat High Court had struck down the state government. The High Court had asked some scathing questions to the government during the hearing of the Suomoto PIL, which expressed strong resentment against certain policies of the government. Why is remedivir injection available in one place? Why can't people get injections at home? If there are enough beds and oxygen in the hospital then why is there a line of 40 ambulances outside the hospital? Asking such questions, the High Court urged the government to take immediate and drastic action.
અહીંથી  વાંચો  ગુજરાતી  ન્યુઝ
Government Hospital List
Private Hospital List
માઁ કાર્ડ માં કોરોના રોગ સમાવિષ્ટ કરાવતી જીલ્લા વાઇઝ હોસ્પિટલોનું લિસ્ટ
Share Tweet Share Email
Newer Post Older Post